They’re here! We have received our stocking order of Forced Performances latest line of street turbochargers. These units range from a T4 based 7582, to a MONSTER T6 8588! Aimed at the LSx crowd, we’ve itemized use for each unit so you can easily pick a good, budget friendly combination for your ride! At just $849, it’s a blast for a bargain!

The HD7582 Street Turbocharger from Forced Performance is a great turbo for stock to mildly built LS motors. With its 75mm compressor inducer and 82mm turbine exducer, you can expect to see between 500 and 800 horsepower from a single turbo application. We offer this in two different T4 turbine housings, a 1.10 A/R and a 1.25 A/R. We recommend the 1.10 for stock or smaller motors, i.e. a 4.8 or 5.3, while the 1.25 responds very well on a larger or more built motor such as a 6.0 or such applications that use a looser converter or have a larger cam.

This complete turbocharger is perfect for the value minded customer who wants 500-1000 horsepower from a single turbo setup on a large displacement V8 motor. This model performs well in low boost situations and has been inspected and approved by Forced Performance. Forced Performance can provide repair and upgrade service on these units just as easily as any other S400 turbo, so when you want to go larger next season, you’ve already got a good start!

The HD8588 Street Turbocharger from Forced Performance is a great turbo for mild to heavily built LS motors. With its 85mm compressor inducer and 96x88mm turbine exducer, you can expect to see between 800 and 1200 horsepower from a single turbo application. This turbo ships with a divided T6 1.32 A/R turbine housing which is well suited to the larger displacement motors with a good bit of cam and higher stall than factory. 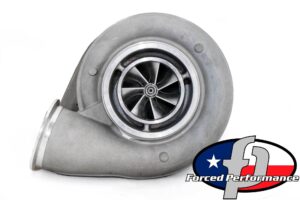